Explores and exports all of Daggerfall’s 3D models, cities, and dungeons.
Works like a visual atlas for searching and exploring anywhere in Daggerfall’s world.

The code library that interfaces between Daggerfall’s DOS game files and Daggerfall Unity. The included Importer allow to explore specifics models and billboards (disable Billboard Batch) as well as towns and dungeons layouts. Your best option is to download Daggerfall Unity from Github (video tutorial), as it contains all the tools and it allows to test models directly in game. Once you have the Unity Editor running, you can import a model placing a fbx or obj file in a subfolder of  Assets, for example Assets/Resources/Models, Assets/Resources/Flats or Assets/Game/Addons/MyMod. You can find all required informations about Unity and Models at this page, but here are provided the essential parts.

Daggerfall uses models for buildings and props, which can be explored with Daggerfall Modelling. This tool associates every mesh with a numeric ID which is also used by Daggerfall Unity to identify them for the purpose of modding. In order to replace a vanilla mesh, a gameobject named with this ID must be provided via dfmod packages. The first step is to place a mesh file, typically a .fbx or .obj, in a subfolder of Assets and let the Unity Editor import it. At this point default material(s) are created. You can simply assign them a texture or, if you desire more customization, create a prefab and assign components to it. What’s important is that the parent gameobject (prefab) is named as the mentioned ID.

Daggerfall often reuses the same mesh with a different material for different climates. Additionally, many buildings and props have a summer and winter version.

When a custom prefab is injected, this behavior is lost. We can replicate it providing prefabs with a tag for specific climate and season. This means diversity can also be increased with different meshes. For example the winter version can have more realistic snow, while summer version can include 3d vegetation.

(1) Desert has no seasons: use ID_Desert.

The base name is used as a per-mod fallback. All mods are seeked with load order and query stops on first match. Base name matches everything. For example a mod that only provides base models can be extended with other mods with specific seasons and climates, while the base model is still used for the non-provided seasons and climates. But if mod with base is loaded in a lower position, load order is respected and “overrides” everything. The original game used billboards (sprites) to render characters, enemies, animals and small props, and so does Daggerfall Unity.  Altough this gives an interesting and characteristic look, the ability of replacing them with 3d models is surely one of the most requested features of the modding system.  We can do this in the same way we supply new models as explained above.

First of all we need the identificative, which is composed of two numbers: archive and record. Daggerfall stores billboard images in the same manner as any other textures, so Daggerfall Imaging is the tool for this job. Once we have these numbers, we can import a mesh with the Unity Editor as usual and call it archive_record. We ignore the third number, frame, because is up to the imported gameobject deal with animations.

It’s important to note that these models are placed in game assuming the origin is at the base, where they touch the ground or the surface they are positioned on, so place it in this position when you create them with a modelling software. Rotation on the up axis of the 3d mesh is randomized to make up for the camera-following movement of 2d billboards.

It is possible to write a Monobehaviour class that handles the instantiation process for npcs graphic assets, meaning the people that wanders around towns. This component must inherit from MobilePersonAsset and be added to a prefab named MobilePersonAsset. This component will serve as a provider for wandering npcs, replacing  MobilePersonBillboard class. A basic example is available on the forums.

Props and sprites in Daggerfall are often bad positioned and this becomes apparent with high screen resolutions and higher quality assets. A component named ObjectPositioner is provided to fix most of these offending situations, such as houses furniture or dungeon treasures. This component has a direction property, which is the local space oriented axis along which the asset is transitioned. 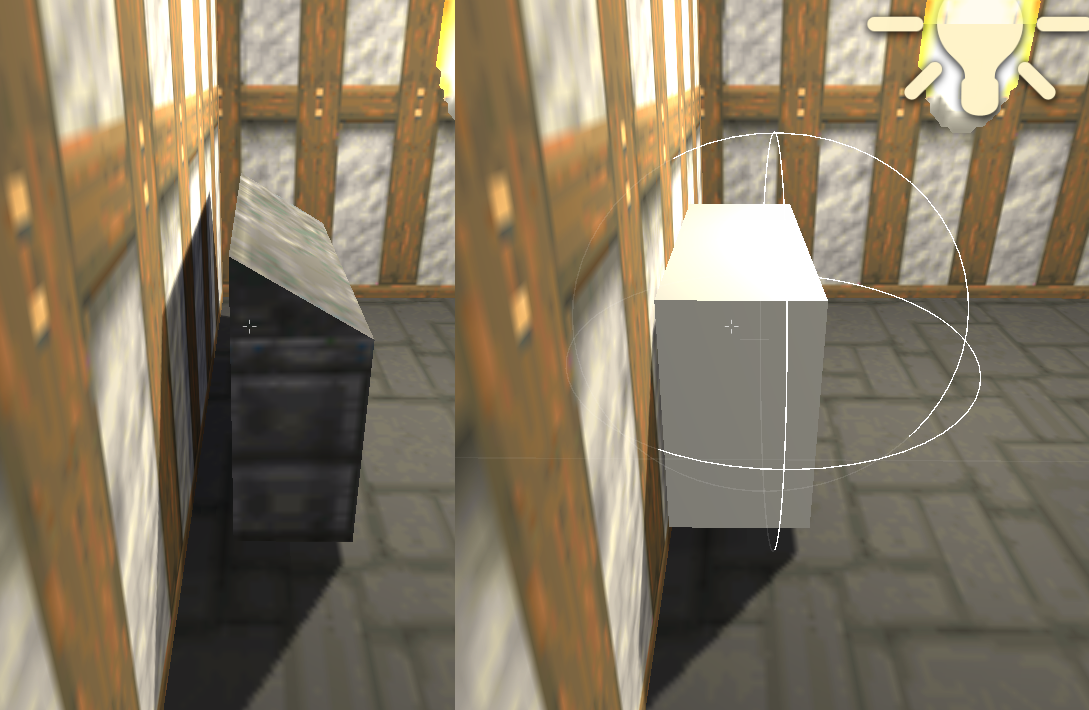 Custom positioning can also be achieved with any component that implements the IObjectPositioner interface.

To overcome this issue we can use a component which will find the position of the wall at run time and rotate the torch accordingly. This one can be found under the name WallPropPositioner

To overcome this issue we can use a script which will find the position of the wall at run time and rotate the torch accordingly. This can be found in the inspector of the Unity editor and added as a component of the GameObject (Add Component).

The wall will be seeked inside this radius. Big values can cause wrong results.

Angles lower than this will be ignored.

The actual rotation is corrected by this value to take small inaccuracies into account.

Translate the GameObject so that it touches the wall.

REMOVED: this is now always true

Fix issue where GameObject clips with the wall if the origin is next to it.

REMOVED: this is now always false

Remove the GameObject if it can’t be positioned correctly.

Daggerfall has dinamic changes during the day time flow; for example towns buildings have a light blue emission map for windows when the sun is up, while a yellow map is used at night.

To reproduce this behaviour on imported models we can use the component DayNight, which can also toggle lights and particles of lamps and torches. Turn on lights and particles at night time, turn them off at day time.

Selected Particle Systems  (only for SelectedOnly).

Selected Lights  (only for SelectedOnly).

Update the color applied to the emissive material according to day time.

The index for the MeshRenderer of the material whose emission color will be dinamically changed (only for DaggerfallColors and CustomColors).

This is found from Inspector -> Mesh Renderer -> Materials.  This material can (and typically should) have an emission map, while emission color and emission strength will be overridden with day and night colors and strengths.

The HDR color applied to the emission map at day time (only for CustomColors).

The HDR color applied to the emission map at night time (only for CustomColors). Nevertheless, sometime you may want to slightly alter the door position for aesthetic purposes. In this case it’s possible to include with your model both a textured door which is visible in the game and an invisible door in the correct position which acts as the collider for the trigger effect.

This is as simple as a planar mesh, with the same size of the door and enabled Generate Colliders. To achieve transparency set the material rendering mode to Cutout and albedo to a color with full alpha, for example #00000000.

There is also an experimental component named CustomDoor which allows to defines door positions with triggers.

The following is a list of limitations for the current version of Daggerfall Unity, which might be resolved with a future update.