It’s almost the end of the month, which means a fresh round of Daggerfall Unity Live Builds. May comes bearing the full lycanthropy feature from curse through to cure. If you’re the kind of Daggerfall player who just loves to wolf out (or tusk out if you dig more on wereboars) then this update is for you! Note that some spoilers are below for how lycanthropy operates and the paths to curing or managing it.

If you tangle with a stray werewolf or wereboar while out adventuring, there’s a small chance (0.6%) that you will become inflicted by their same curse. Unlike other infections, this one will bypass your normal disease resistance unless you happen to already be a vampire or lycanthrope. On the first evening after infection, you will have a dream about a “man who is less than a man”. 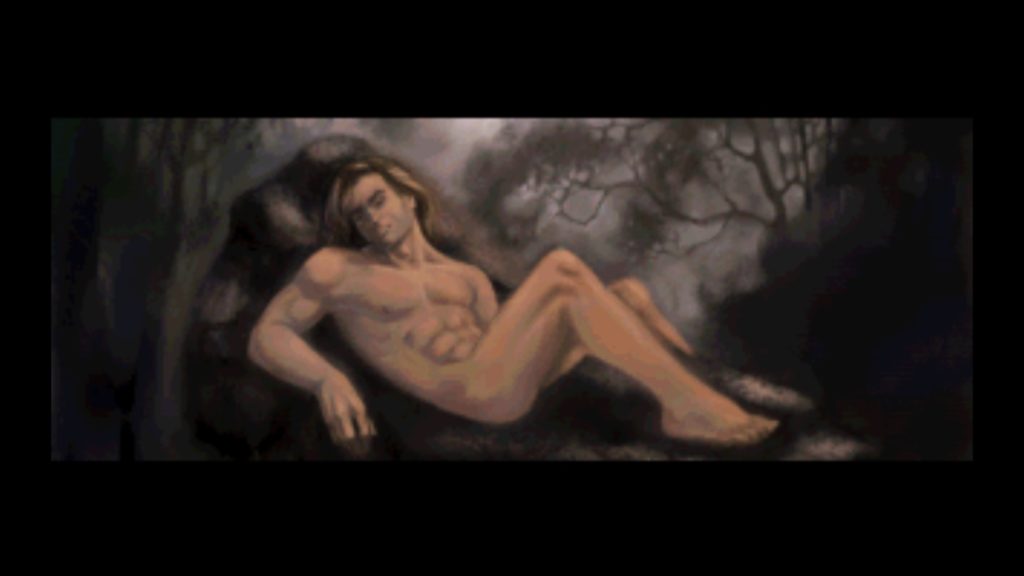 If you see this dream, you have just three days to find a temple healer or cure yourself through magical means. If you let the disease run its course, you’ll be cursed to hunt the innocent once per month and will be forced to shapechange when either moon is full.

It’s not all bad news though! As a lycanthrope, you receive a whopping +40 to your Strength, Agility, Endurance, and Speed. You also get a +30 increase to Swimming, Running, Stealth, Critical Strike, Climbing, and Hand-to-Hand combat. If your character was already an above-average fighter with their fists and feet, they are going to make a fearsome lycanthrope.

Let’s meet Koro, he’s a level 2 Nord Warrior who loves using his fists on everything. He just had the misfortune to encounter a werewolf not long after Privateer’s Hold and was lucky to escape with only a scrape or two. He had no idea what to make of that dream a few nights back, and now finds himself mysteriously stronger and faster than ever with some unusual cravings. In that last bar fight, he just about tore the pore sod in half. He chalks all this up to a healthy diet of Ale and Fowl at the Black Wolf tavern where he currently resides in Daggerfall city. Unfortunately, having only a 48 Intelligence, Koro is unable to appreciate the irony of his new situation.

Something else Koro doesn’t know is that he can’t get sick ever again. No disease can touch him now, although poisons are still a concern. 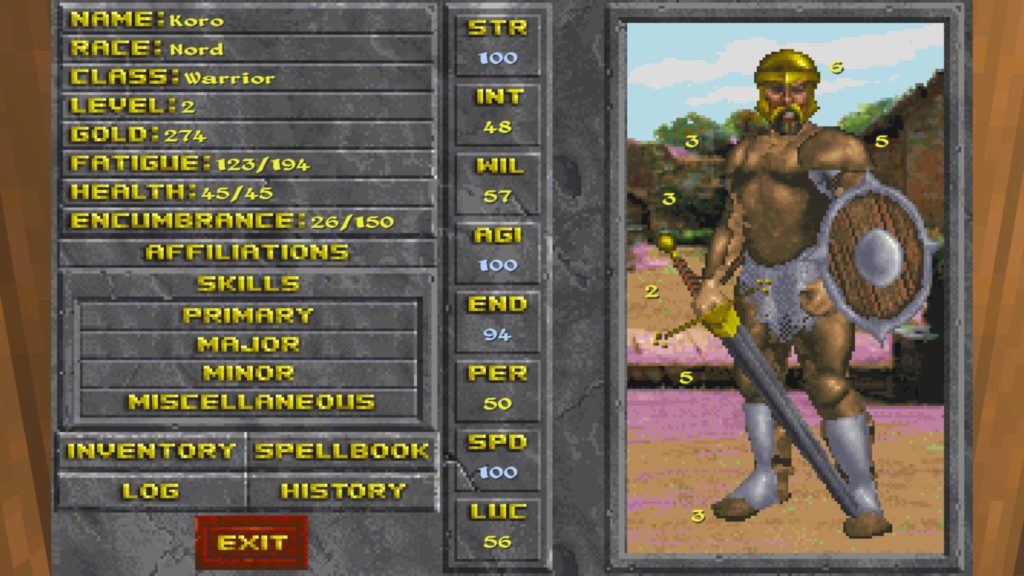 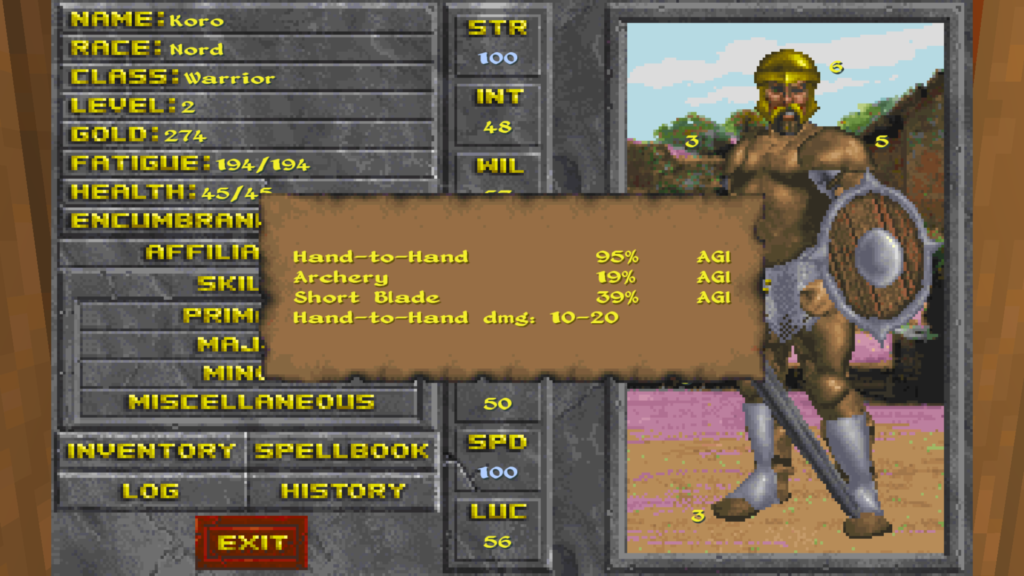 Two moons hang over Tamriel: Massar and Secunda. These have alternating cycles where a full moon rises once every couple of weeks. Unfortunately for Koro, and even moreso for the innocents of the Illiac Bay, his first full moon is several nights after developing full-blown lycanthropy. By this stage, he has started to suspect it wasn’t just the tavern food behind all of this. His suspicions are confirmed the night after meeting with Lady Brisienna elsewhere in Daggerfall, when he wakes up in the early morning hours with a whole new set of problems. 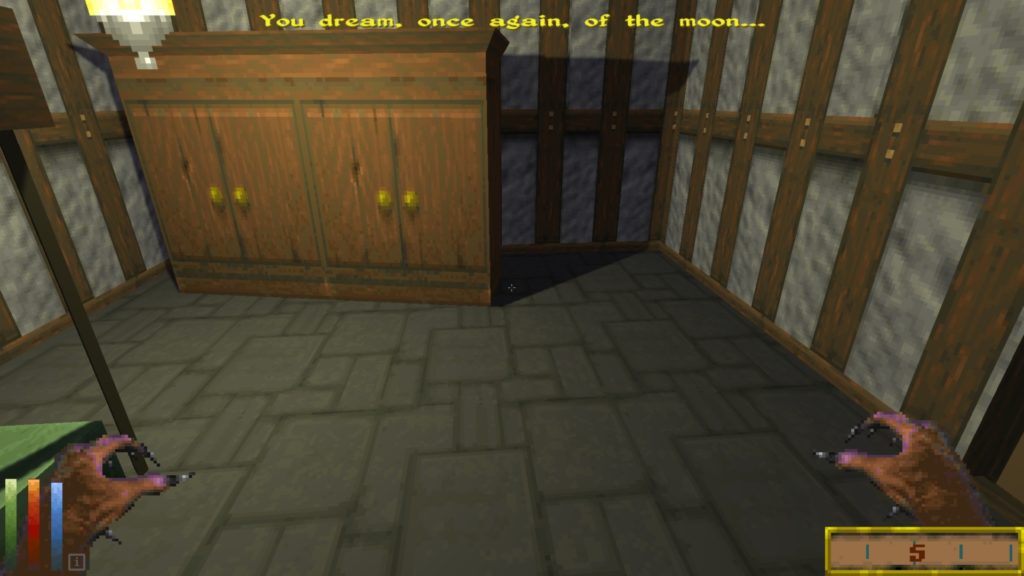 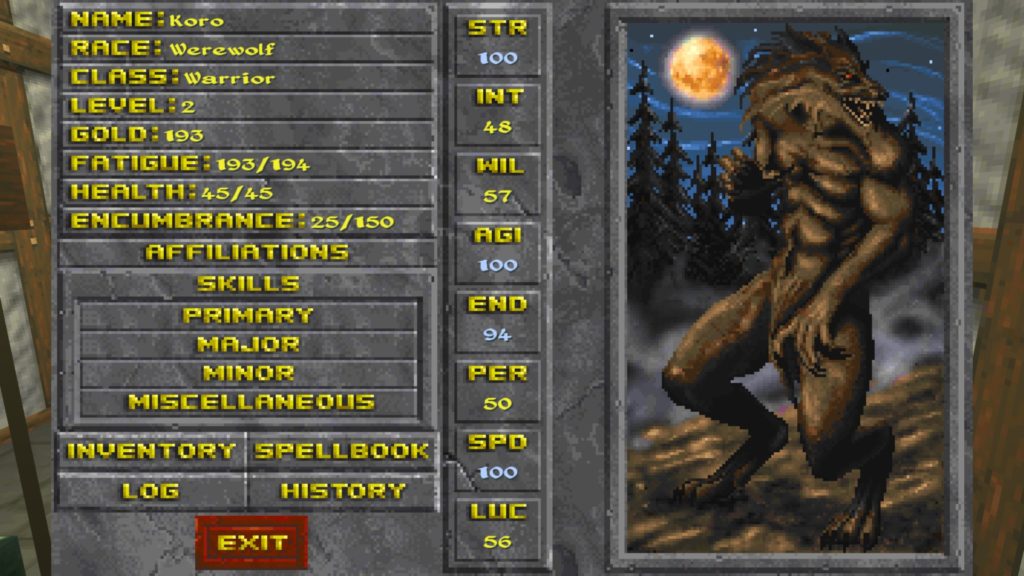 Koro flees into the night past some some very startled patrons. He won’t be returning to the Bat and Scorpion anytime soon. What’s worse is he’s hungry. Hungrier than he’s ever felt before. Fortunately, it’s late at night and nobody else is around. He makes a run for the woods beyond the edge of this small one-tavern town. After running wild for the next day, he’s able to return back to his normal self. 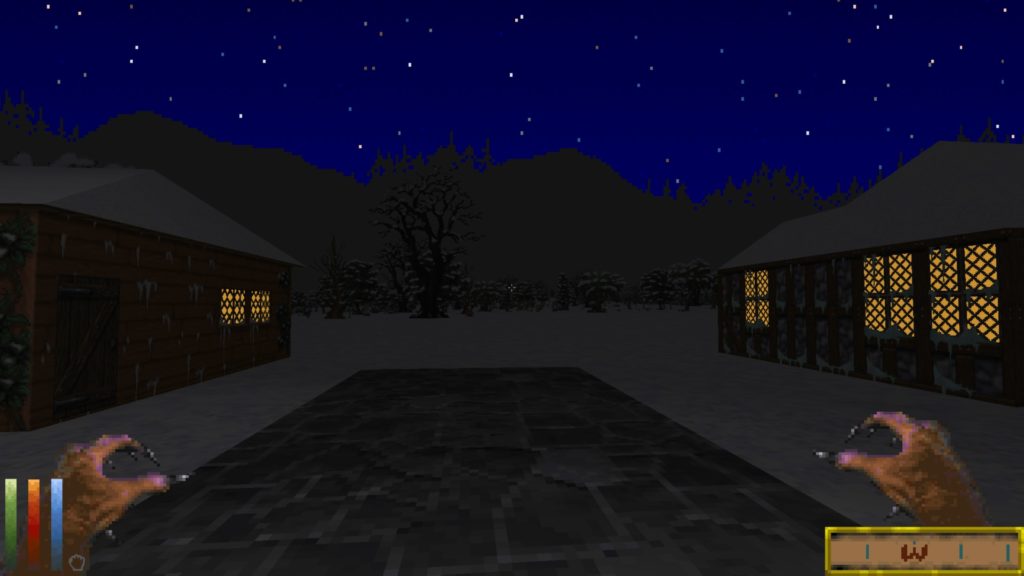 For the next few weeks, Koro manages his curse by staying away from populated areas during full moons. He even discovers he can bring on the change once per day using some innate magic he now possesses. To his amazement, his body is healed fully each time he shapechanges between forms. Perhaps this won’t be so bad after all. It just needs to be managed properly.

On the month anniversary of becoming cursed, Koro finds himself hungry again. So hungry it hurts. So hungry it feels like he’s about to die. Without having hunted the innocent even once, his curse has left him with only 4 health remaining. A giant rat would probably be enough to knock him over for good. 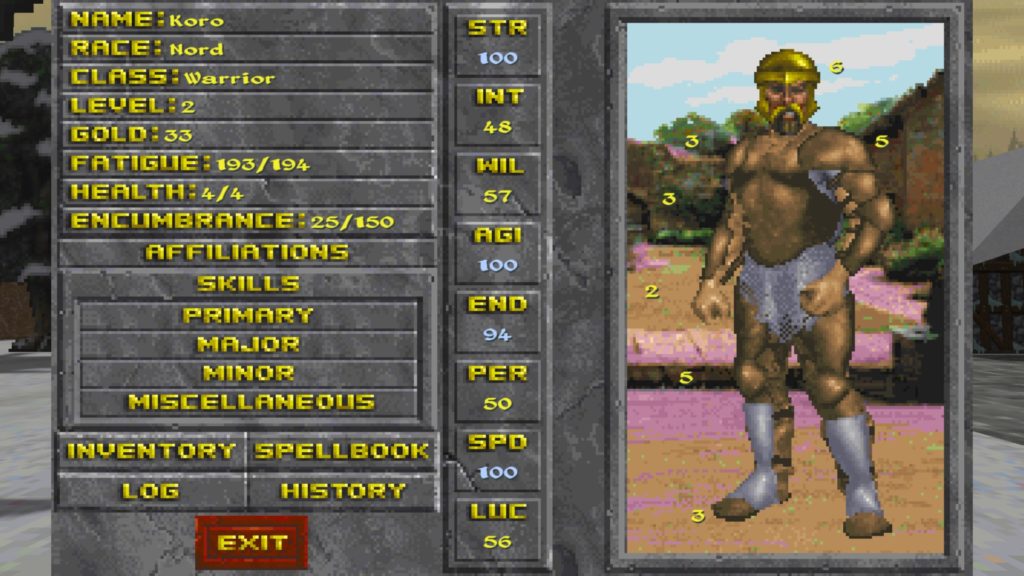 After battling his urges for weeks, Koro can bear it no longer. He has to hunt, every cell in his body demands it. He watches the innocent civilians going about their business for a while, then finally gives in to the hunt. It’s the only way to make himself whole again.

While fighting as a werewolf, Koro discovers that not only can he rip the city watch to shreds in moments, he’s completely immune their basic iron and steel weapons. Finally sated, he runs back into the wilderness again to rest and recover his lost health.

Several weeks later, Koro is exploring a local dungeon when the change is forced upon him by a full moon. Bafflingly, he can’t reach his pockets. How has he never noticed this before?

After a bit of squinting and whimpering, he discovers that he can will himself back into humanoid form for a few moments before the moon forces him to change back into a wolf again. Just enough time to loot the body of that unlucky orc.

Almost a year has passed since Koro found himself cursed to be a werewolf. In that time, he’s found an uneasy peace with his life. He enjoys being relentlessly powerful, but still feels guilt when he must hunt the innocent. He dreams of ending his curse. Then one day, he finds a letter in his pack that offers redemption or death. It seems word of his monstrous life has reached the ear of a lycanthrope hunter. 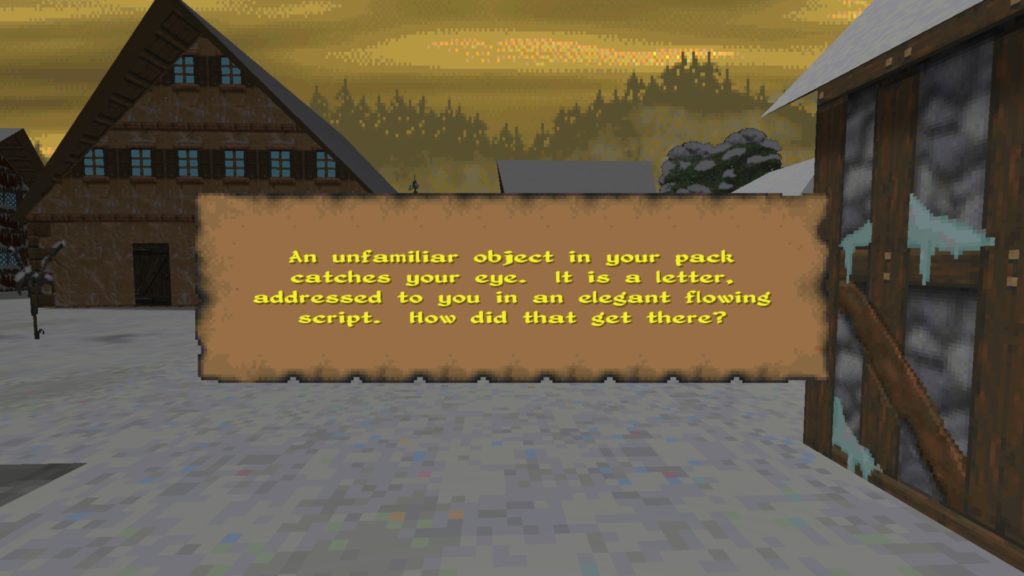 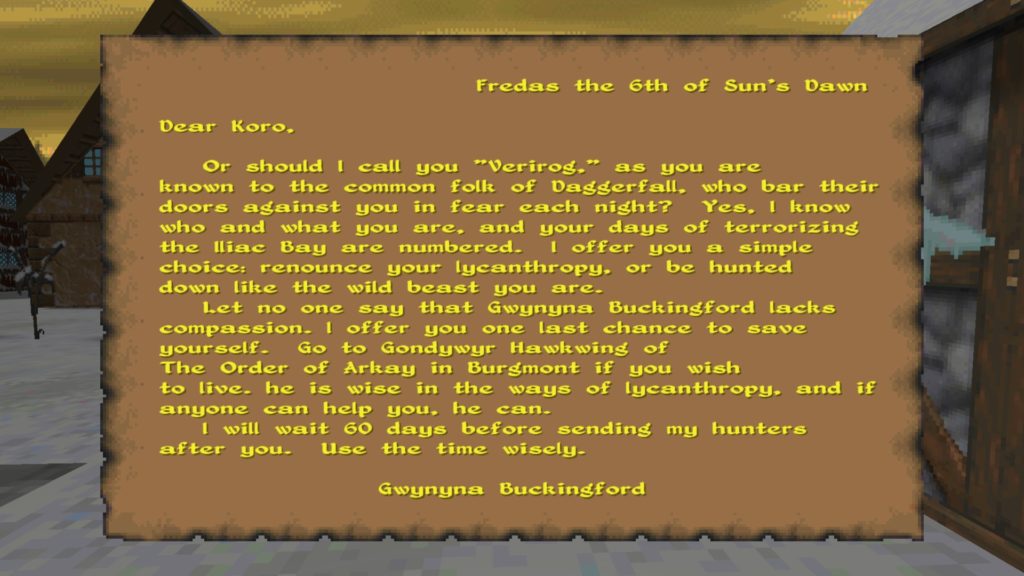 He seeks out the Order of Arkay in Burgmont where Koro is told that to cure his lycanthropy, he must pass the disease on to another. 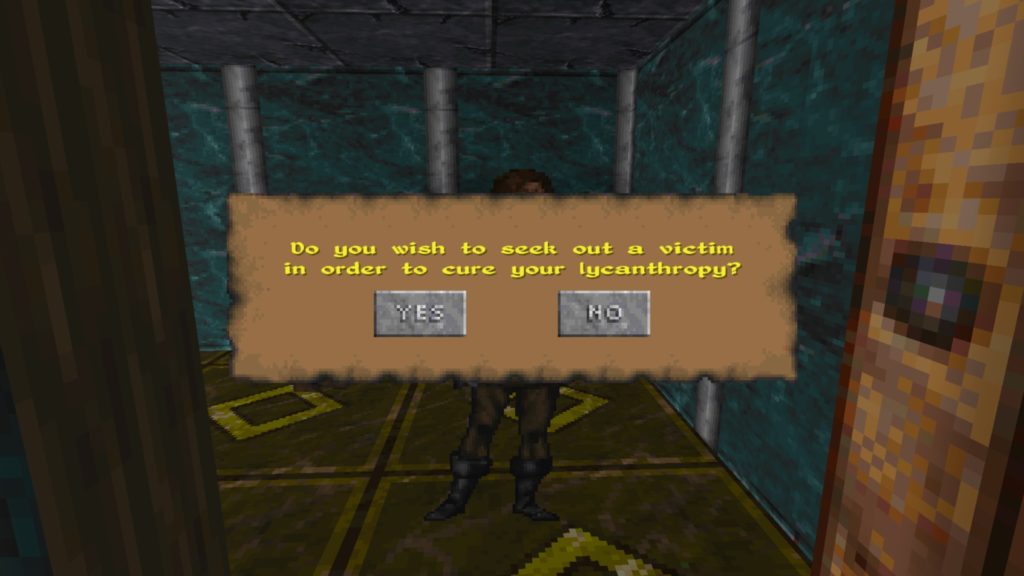 Wanting an end to the bloodshed, Koro rejects that choice. What if the one he inflicts is even more blood-thirsty than himself? Gondywyr Hawkwing is relieved and offers him another, albeit a less likely, path. 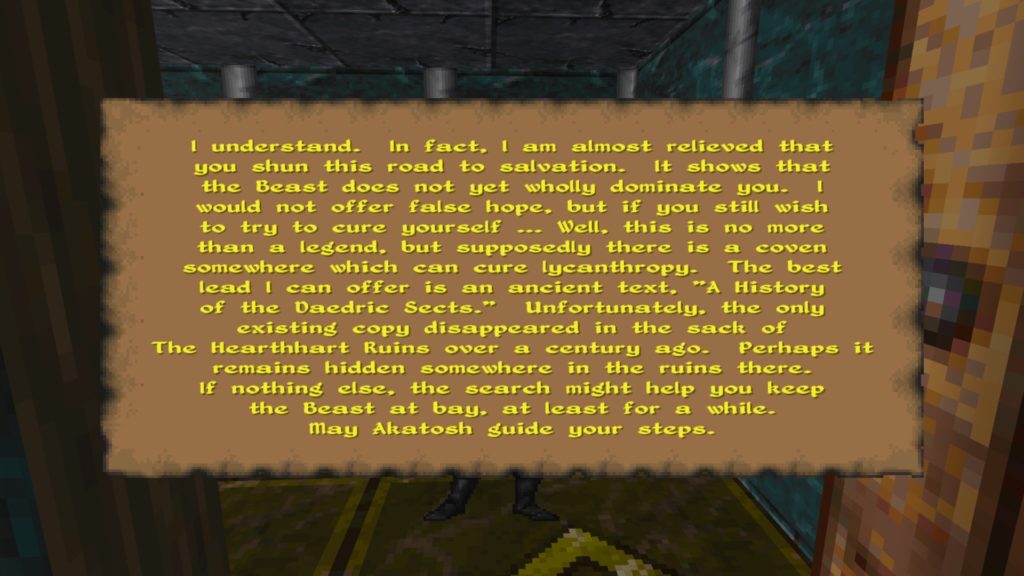 The Witches of Glenmoril Coven

After a series of adventures, Koro finally locates the secretive witches of Glenmoril Coven in Ilessan Hills. They’re amused by his affliction, but not immediately helpful. They put him to work with some quests to further their own goals. Without many options left, Koro does his best to make them happy. 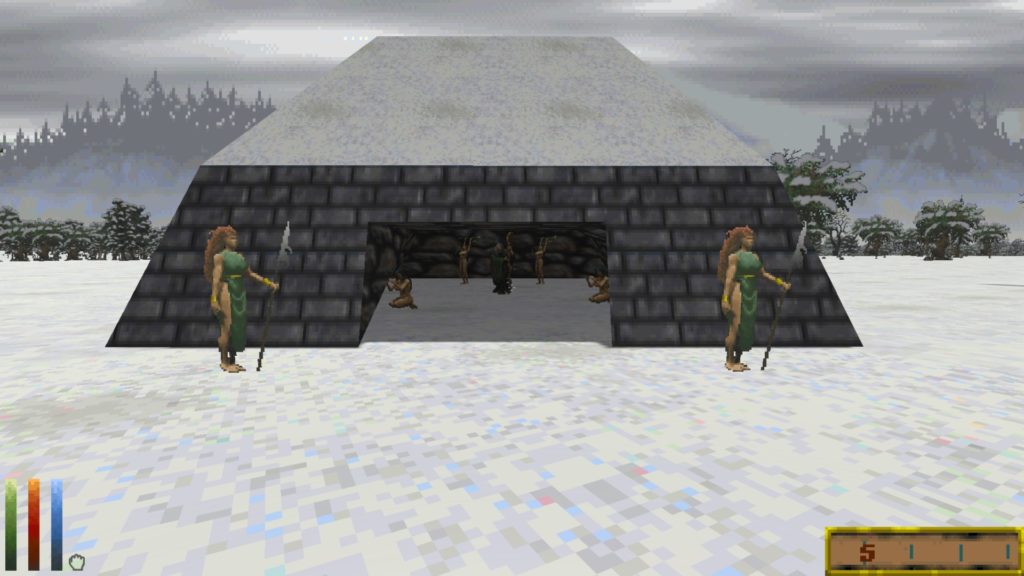 Koro discovers the Glenmoril witches can summon the Daedra Hircine on any day of the year. Hircine is known to be a patron of wild things, perhaps he can offer some solution? After gathering the exorbitant summoning fee, Koro watches as the crones perform the ritual. And he is blessed! 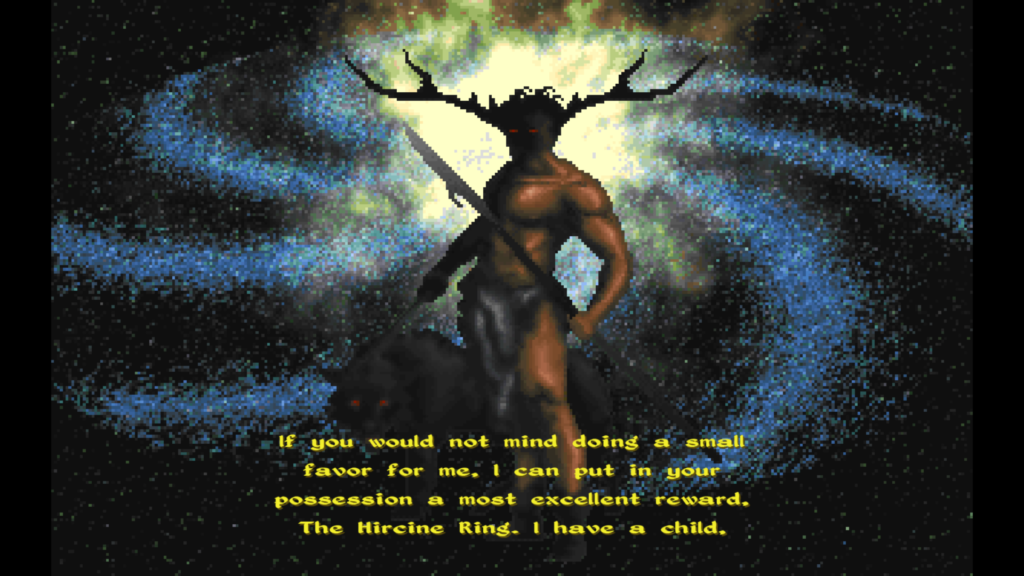 Koro follows the wishes of Hircine and comes into possession of the Hircine Ring. A powerful artifact that allows him to take control of his lycanthropy. 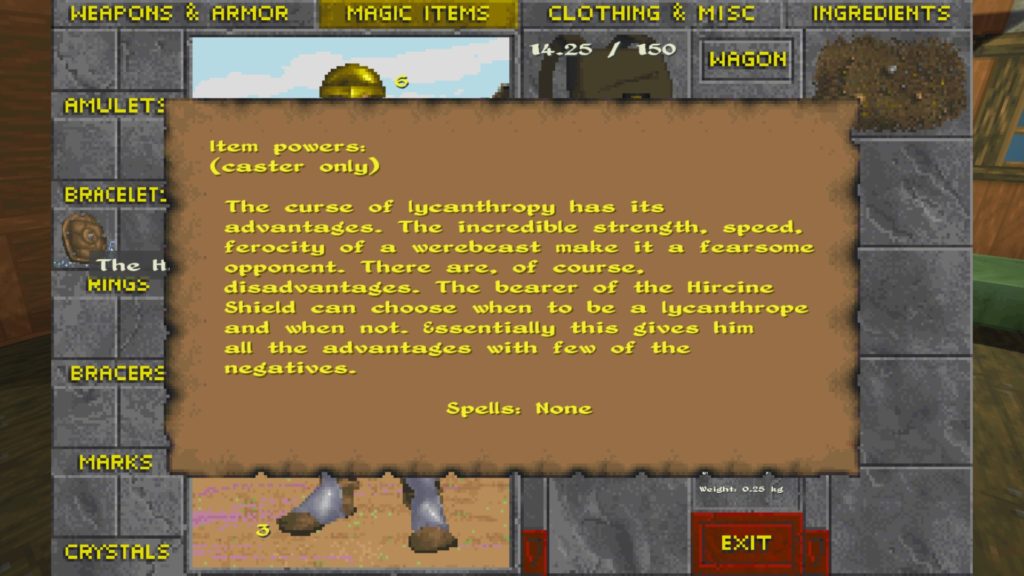 So long as the ring remains on his hand, Koro is no longer forced to change on each full moon and his hunger is suppressed. He can shapechange any time at will. He has all the benfits of his curse and none of the disadvantages. Not a bad outcome for one adventurer.

If Koro failed to summon Hircine, or could not afford the ritual, there is still another path. After running several quests for the witches, he is one day given a vial of Pure Water to transport to a regional Mages Guild. Did one of those crones wink when handing him that water? 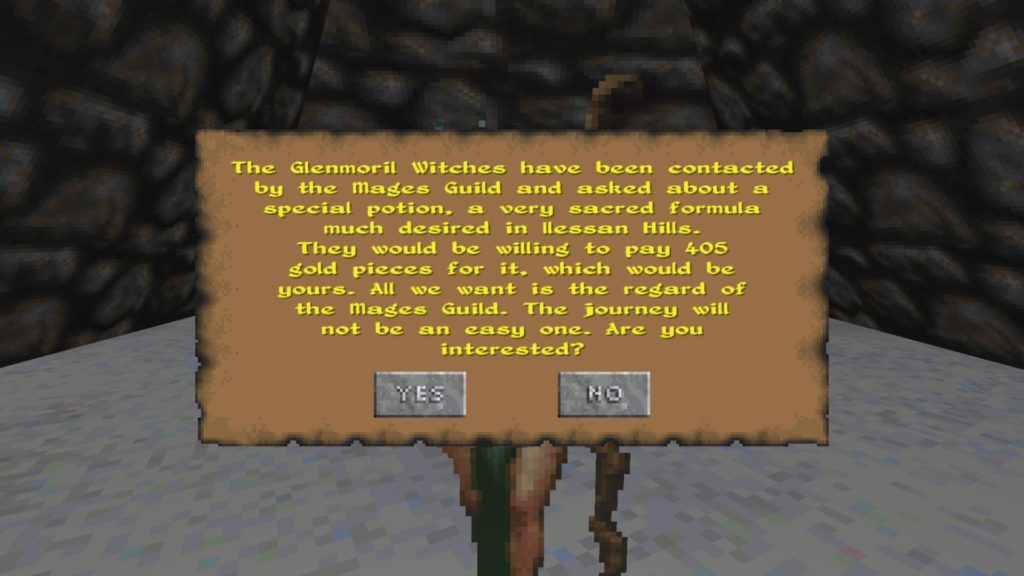 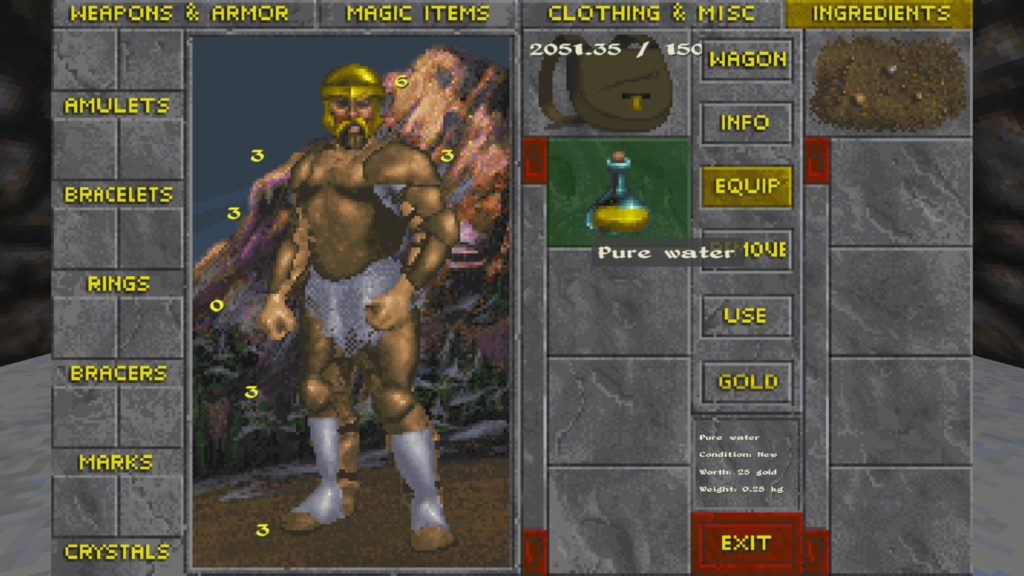 While in transit with the Pure Water, Koro is beset upon by vampires, werewolves, and wereboars in great numbers. Why are they all so desperate for this vial? Thinking of his own affliction and that wink earlier, Koro takes a sip of the water. After a moment of dizziness, he finds his mind finally clear and to be mercifully cured of his lycanthropy. 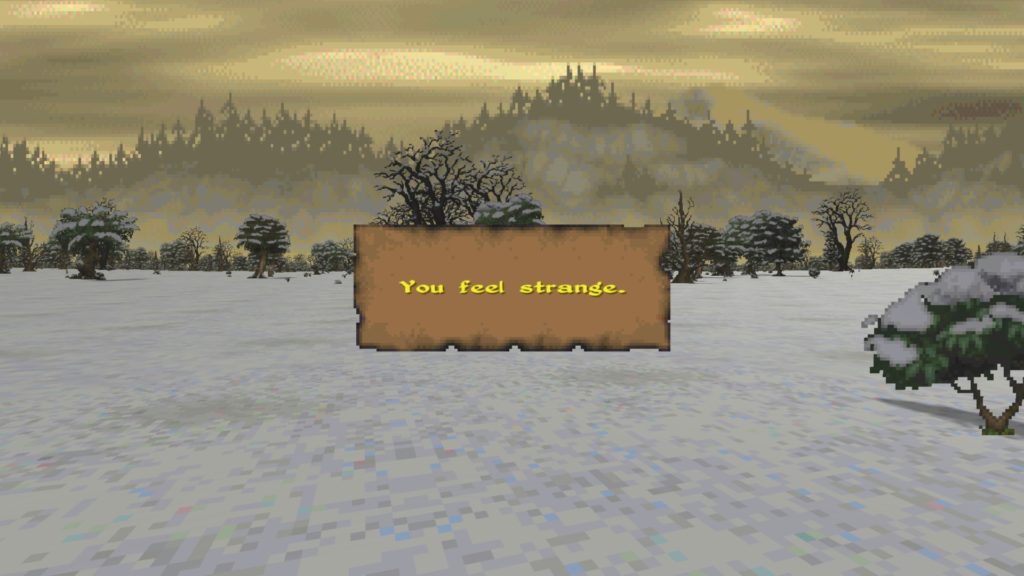 And what if Koro was a different kind of Nord? Right at the start, if he had taken the offer to pass on his curse for a cure. What would have become of him? If that road had been taken, it leads to a sickly child and a horrible choice. Perhaps even now, its not too late for him to turn away and find another way. 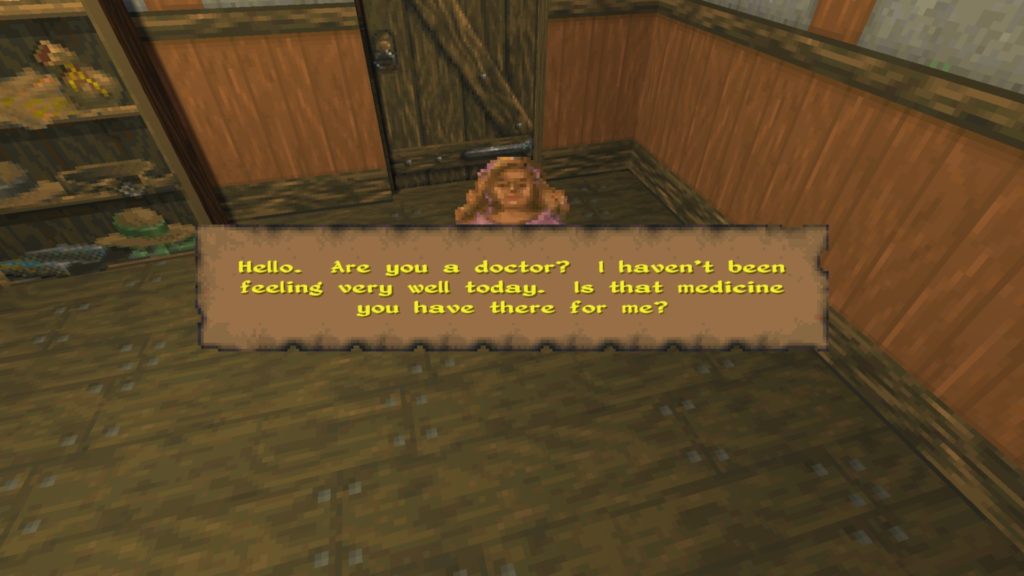 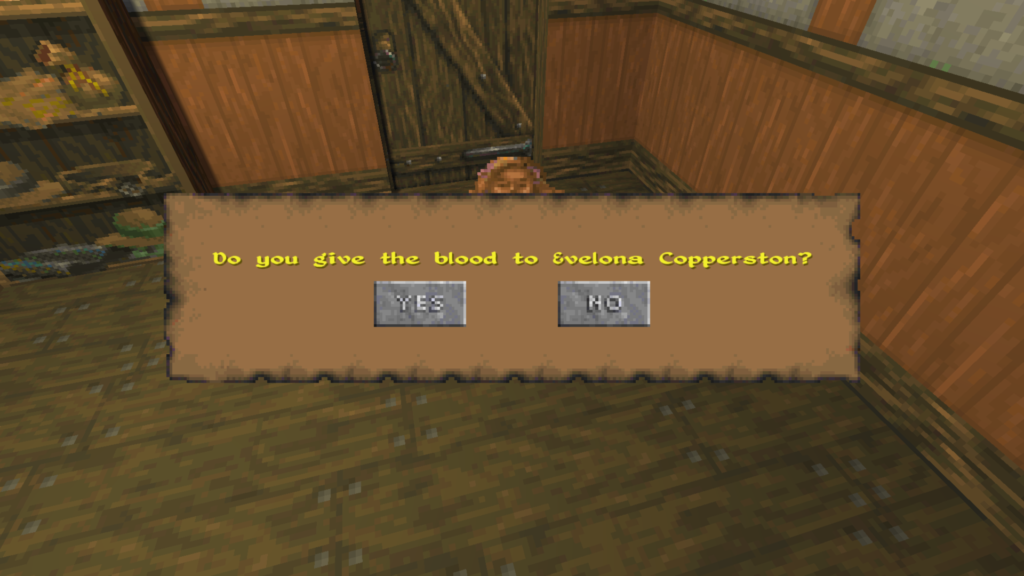 Strengthens Armor adds +5 to your armour class across all item slots. Does not stack with enchantments of this type on other items, or with Weakens Armor.

Weakens Armor reduces your armour class by -5 across all item slots. Does not stack with enchantments of this type on other items, or with Strengthens Armor.

If you already have a special talent like Acute Hearing, Athleticism, or Adrenaline Rush, this enchantment will buff those gifts even further. Has no effect if you are not so gifted to start with.

This side-effect will cause you damage depending on the type:

Any long-time Daggerfall player knows how to exploit loans from banks. You can go to any bank, ask for a huge amount of gold, then simply never pay it back. Incredibly, there are almost no consequences for doing this. We all know banks aren’t that friendly. Pango has taken the time to flesh out this feature somewhat to make it a bit easier to use and offer some minor consequences for defaulting on a loan.

First up, your loans can now be tracked at any time by clicking on your gold total on the Character Sheet (F5). This will show both your active bank accounts across regions in addition to any open loans. 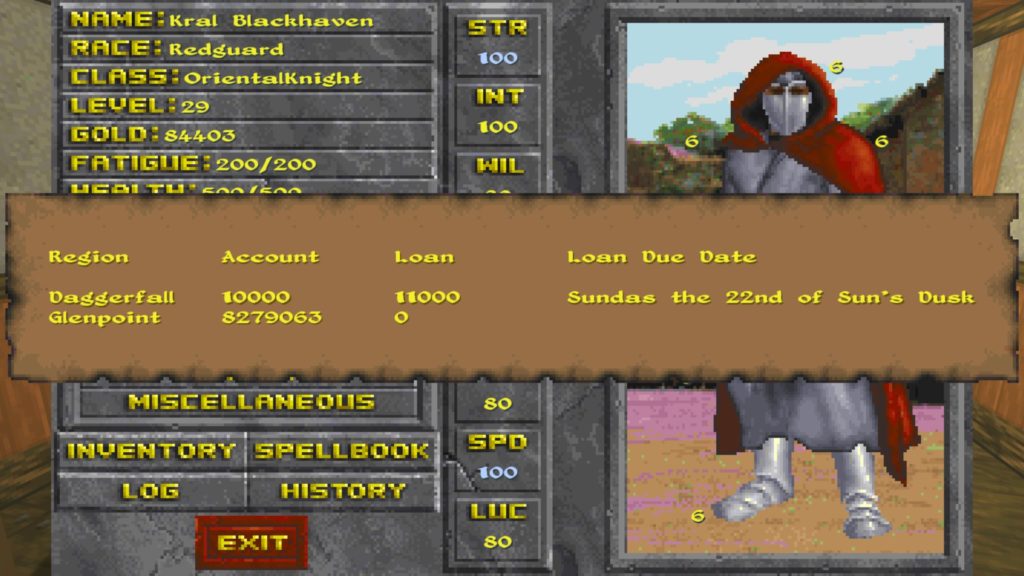 You will also get quick reminders as the due date approaches. 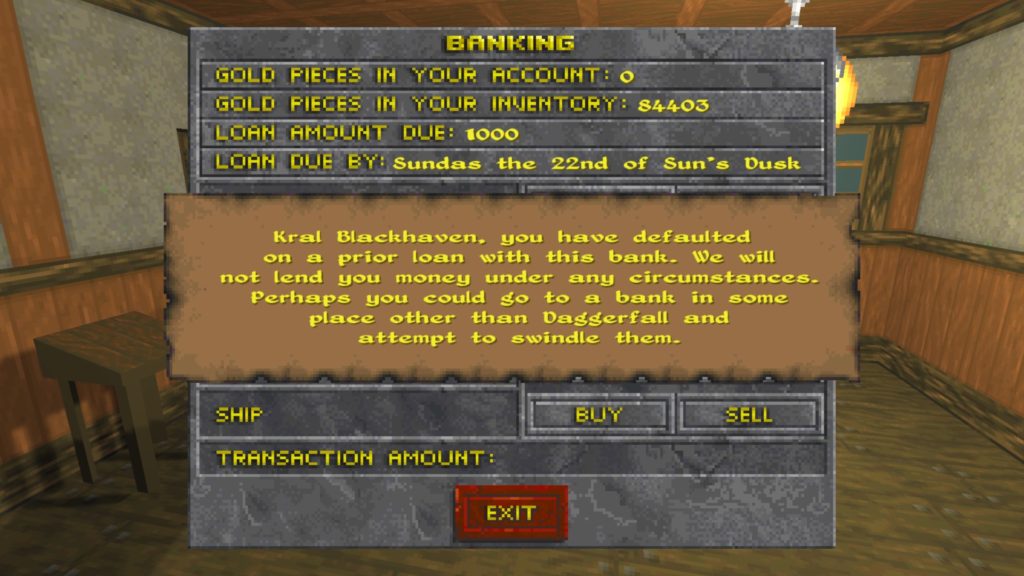 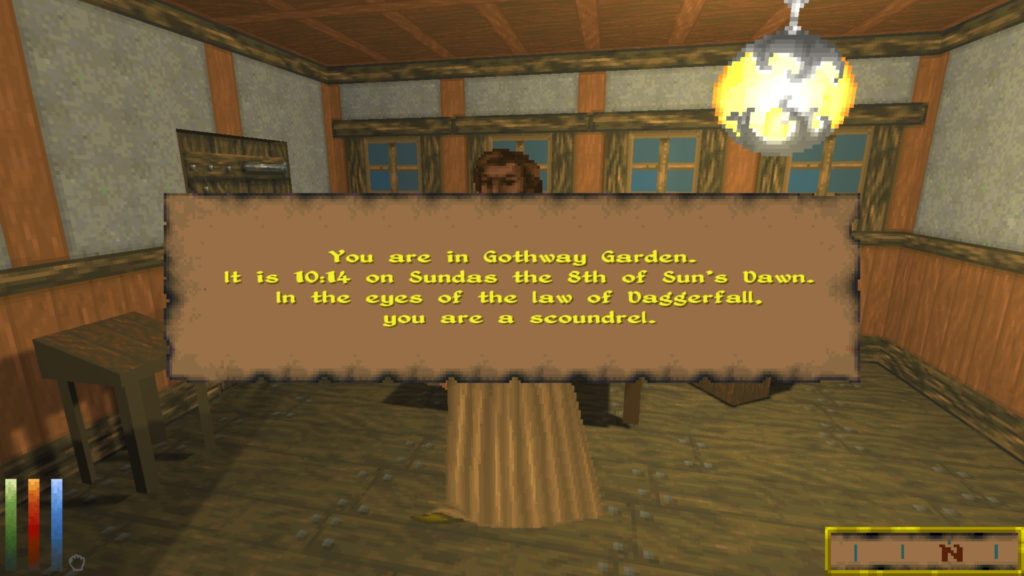 There is also some talk of one day bounty hunters coming to recover your gold on behalf of the bank. While this remains mercifully unimplemented, it might be time to repay your loans before the banks start sending out heavily armed thugs.

Thanks to everyone involved, we also have the usual round of bugs fixes and incremental refinements.