Daggerfall Unity 0.10.26 is now available on Live Builds page. Despite being tagged a preview, a lot of work has gone into this release to create the most stable update possible. If no major issues are found, our next minor release will be tagged as stable.

If you’re still on DFU 0.10.24, you might need to update your mods to be compatible with 0.10.25 and later. Check the release info for your mods to see if an update is required.

In other news, our Beta milestone is coming up fast! Just a few more items to tick off the Roadmap and Daggerfall Unity is feature complete. We should have more news on this before end of the year. For now, let’s unpack everything this new release.

A long-term goal has been to support new translation mods for Daggerfall Unity, delivered simply and easily through our powerful mod system. This has many challenges, as classic Daggerfall draws text from several different files and formats, some text is even baked right into the executable. Internally, classic Daggerfall used an 8-bit wide character format that did not easily support extended character codes. Language packs for classic Daggerfall had to work within these limits and compromise often, such as re-writing text with transcoded characters aligned with custom font glyphs under a 256 limit. Daggerfall Unity inherited a lot of these same systems early on, as we rely on the classic DOS game data.

For the last couple of years, we’ve gradually laid the groundwork for translation mods in Daggerfall Unity. This started with SDF font support built on TextMeshPro, followed by upgrades to how text is handled internally, and now building on the Localization features in Unity 2019 and integrating with Daggerfall’s unique text requirements. In the last few months, we’ve started migrating all legacy text handling from DOS files to centralised text databases and overcoming the limitations of classic Daggerfall a few systems at a time.

In this first preview release of Localization, all text from TEXT.RSC and text previously hardcoded into executable have been migrated to replaceable text databases easily edited via the Unity Editor. Helpers have been created to import text from legacy data and fix transcoding back to correct character codes. There’s no longer a limit of 256 characters and fonts can have any number of glyphs matched to their proper universal character codes. Underpinning this is support for locale detection, runtime locale switching, locale-based fonts, and more.

In the following screenshot (click for full size), a custom string table has been generated containing English, French, and German translations for the game. All text is imported from legacy TEXT.RSC files in a single click, automatically remapping transcoded characters back to their correct universal character codes. A simple plain-text RSC markup system has been developed so that translators can write text easily and natively without needing to remember bytecode for formatting RSC strings.

Default locale is selected by user’s current region at game startup. If no translations for that region are available, it will fall back to a parent region or to English. Regions can be switched at runtime in editor or by console. Screenshots below show switching between French and German for the STRENGTH info popup. Each translation can format text as they wish, and you’ll notice the imported French and German translations use different line spacing, the markup for which is visible in screenshot above. 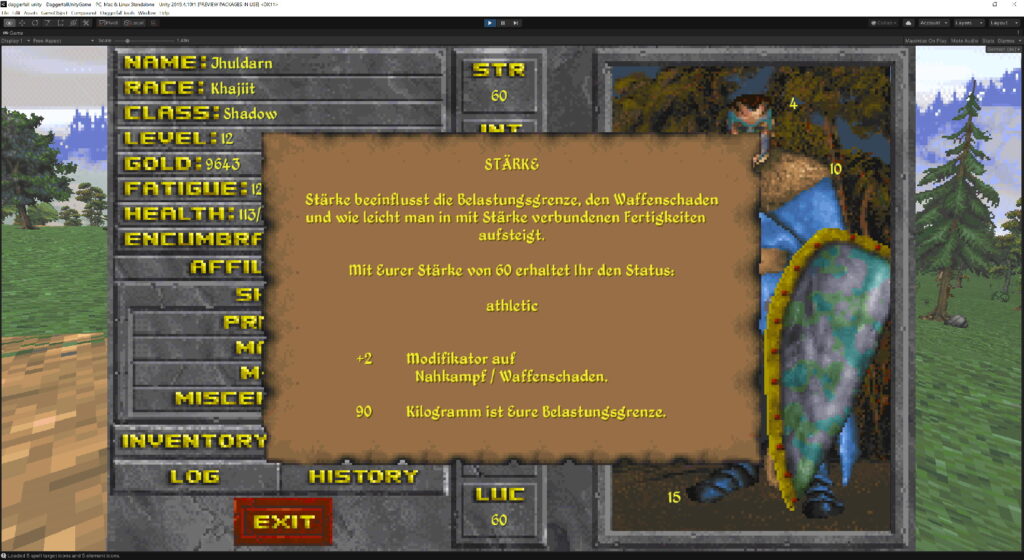 Elements such as UI images with baked in text can be replaced via the standard image replacement process and delivered all together in a single .dfmod package.

Daggerfall Unity Localization is a new feature and will continue to evolve over time. As mentioned, only TEXT.RSC and previously hardcoded strings are currently available for replacement in this preview (which outside of quests is over 90% of all text in the game). Other systems like quests will be moved over to localization in future releases.

You can find more technical information about localization in Daggerfall Unity, including current limitations, in this forum topic. This topic contains a tutorial series in progress demonstrating the creation of a new translation mod from scratch.

Daggerfall Unity has an integrated C# compiler to build mod scripts at runtime. This compiler has a few limitations and can sometimes require mod authors to work around those limits. If you’ve built a large or complex mod for DFU, you’ve probably hit some of those limits by now. From 0.10.26, you can precompile mod scripts to a DLL using Unity’s built-in compiler. This overcomes the limits of runtime compiler and allows for creation of larger and more complex mods. 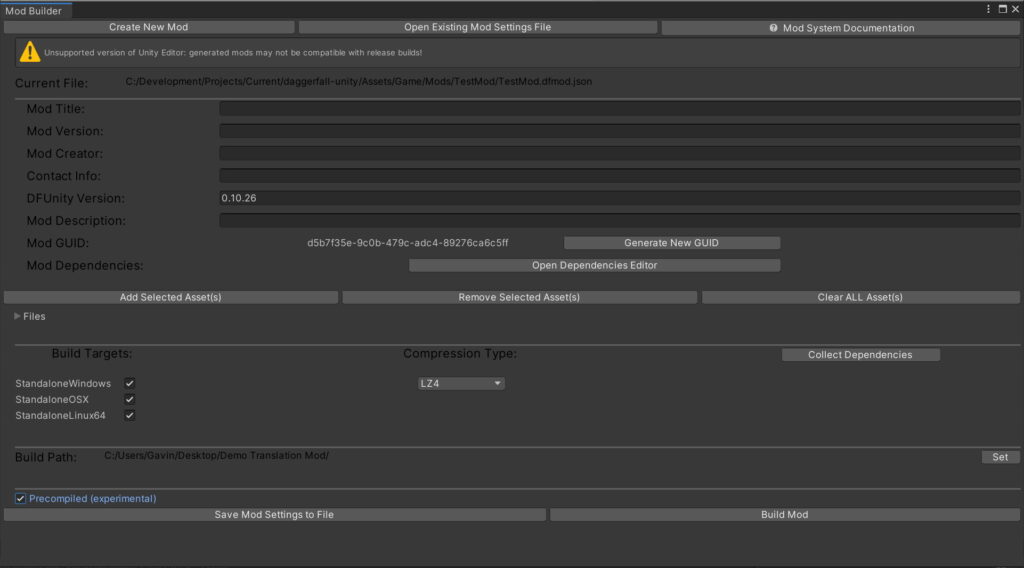 This will support using C# features like enum, tuple, and string interpolation – currently unavailable with the built-in compiler. If you’re concerned about safety of a precompiled mod, source can be extracted using tools like the JetBrains decompiler.

Precompiled mods are considered experimental for now. Future development of this feature will continue based on feedback by the modding community as directed by TheLacus. 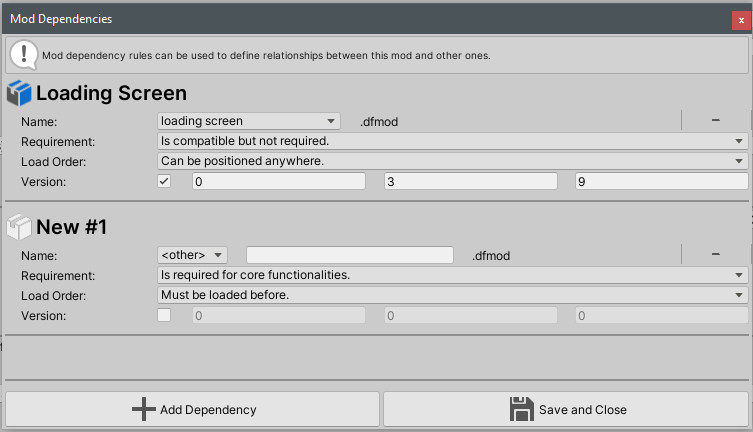 You can switch editing primary and secondary control using the Primary/Secondary button at the top-right of controls UI. Switching will show the loadout for that set of controls, with secondary not bound to anything by default. 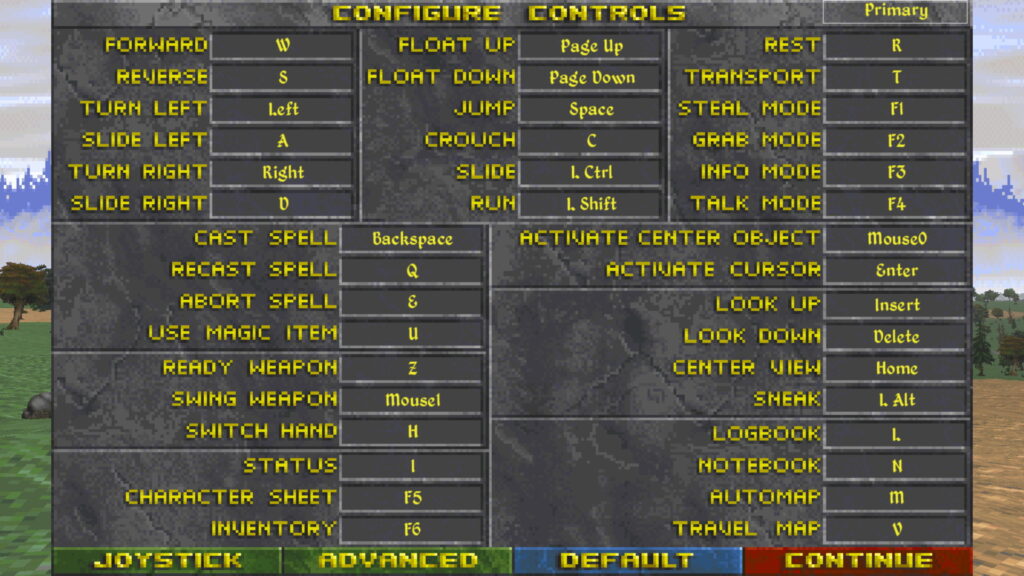 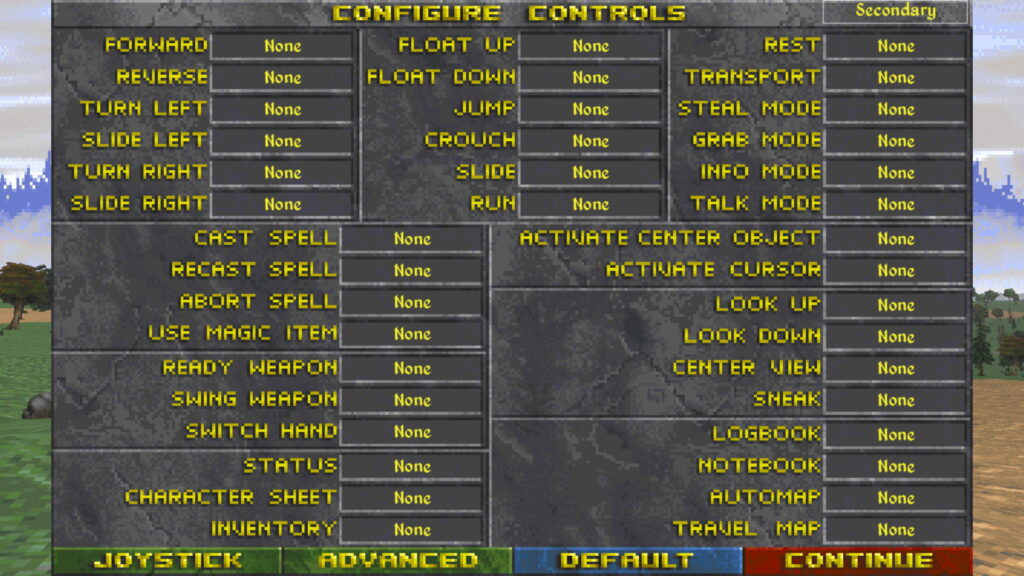 You can now clear a selected binding by right-clicking on a previously bound action in the loadout. 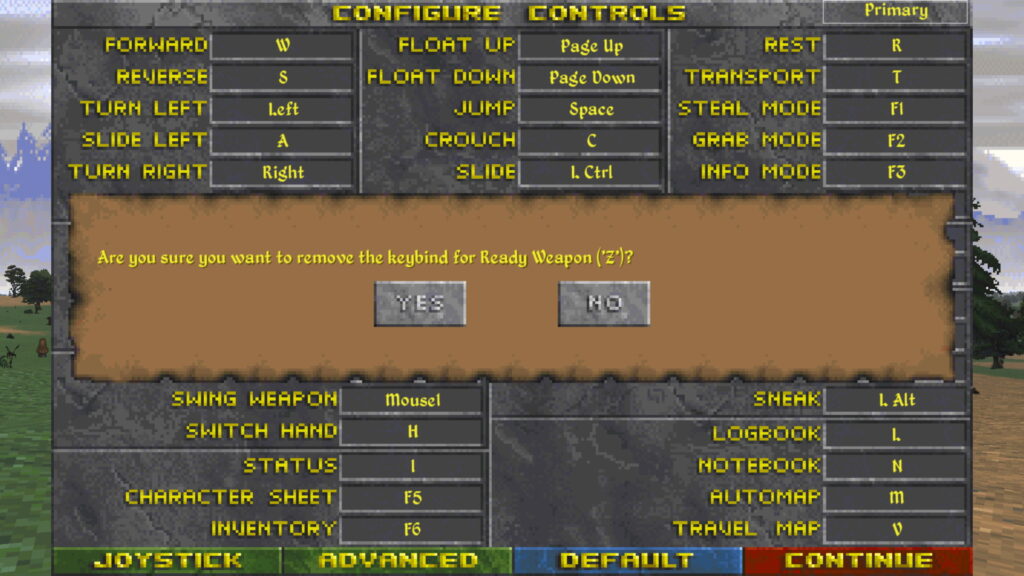 Dungeon water is now displayed on the automap, helping you to plan when to pop your next water breathing potion. Pango implemented this in a way that water is rendered neatly inside the dungeon area, and it looks amazing.

When visiting a large walled city, you might have noticed the bulletin boards posted by the gates. These are now up and running thanks to GalacticChimp, with an epic first contribution to the project. 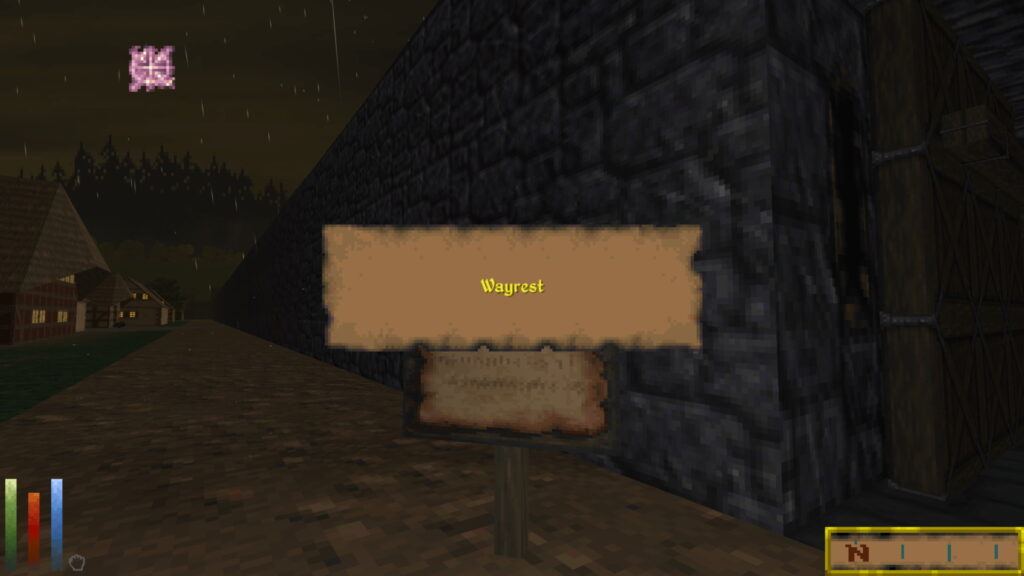 Other than displaying city name, bulletin boards can also list news about witch burnings, changes to allegiance of the various politic factions, and other flavour text. 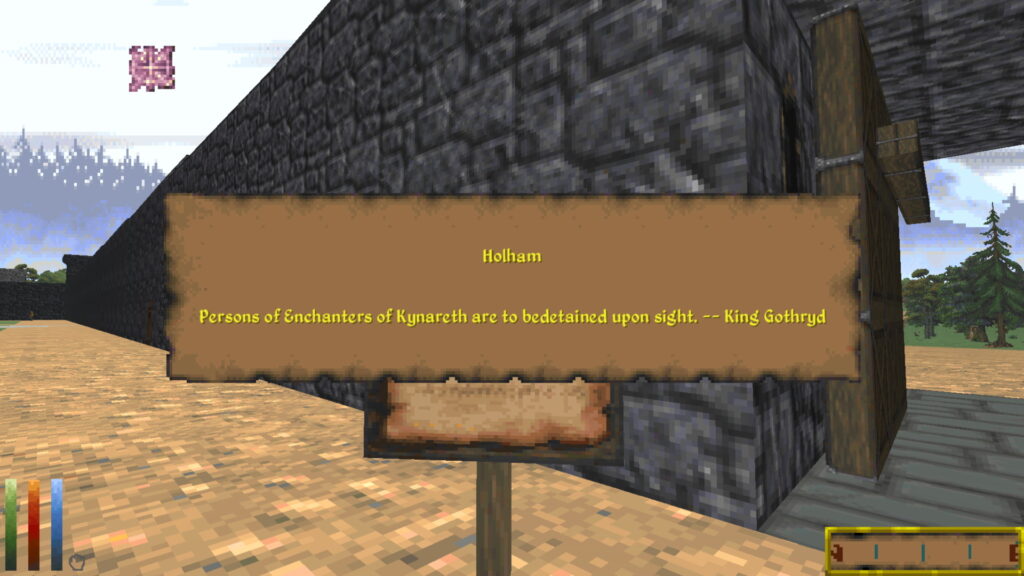 Hazelnut has extended several classes and UIs to better support changes by mod system. This is hard to quantify in a few words or by screenshots, but will lead to some new and interesting mods from 0.10.26 onwards. For example, Hazelnut’s own Travel Options mod for 0.10.26 takes advantage of these enhancements with a fresh overhaul to travel system. 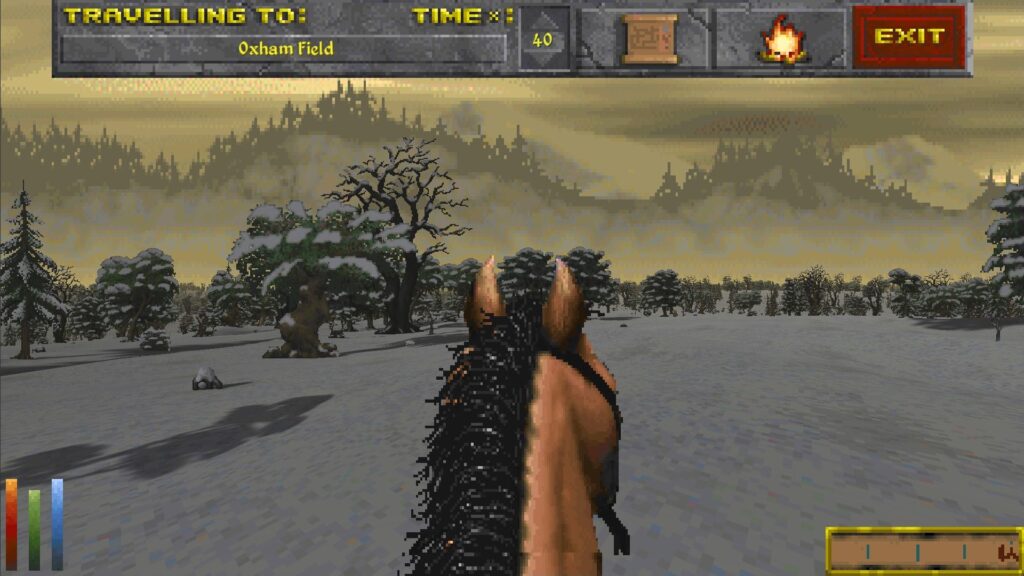 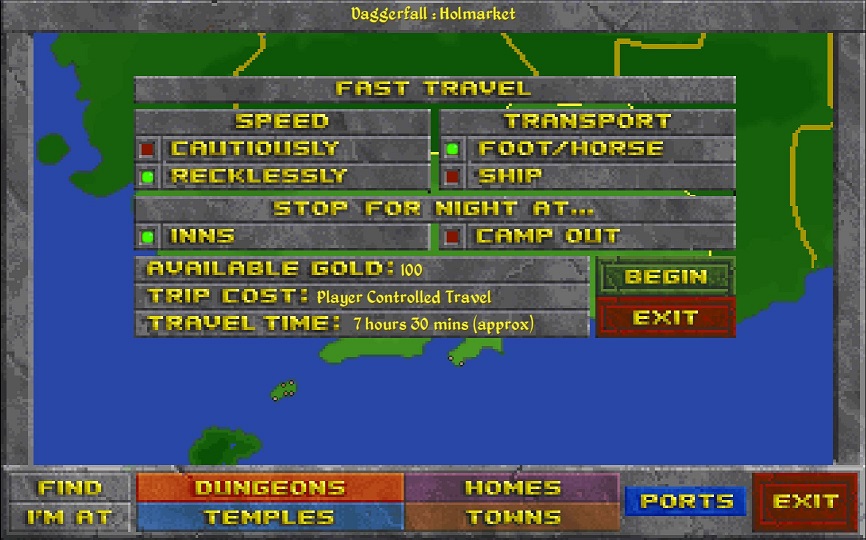 And Basic Roads, a WIP mod also by Hazelnut.

See Hazelnut’s listed items below for his other changes. It’s incredible to see the mod potential for Daggerfall Unity expand so quickly at this stage in the project.